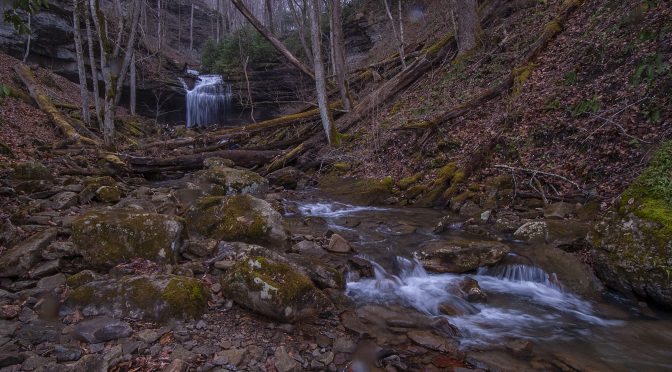 It’s been many years since I first began to attempt to access Dowdy Creek Falls. After several disappointments, this past weekend finally yielded results.

Dowdy Creek intersects the Thurmond-McKendree Rd/McKendree Rd (CR 25) between Thurmond and Prince West Virginia in the New River Gorge Region. It’s a county road, but, I’m here to tell you that it should be deleted from their registry because it is hardly ever maintained. The park district does not recommend use of this road and even discourages visits to this waterfall due to the danger involved.

McKendree Road, by my experience, is the worst road in West Virginia. It’s chock full of truck swallowing holes and impediments that would cause even the most intrepid four wheeler to take pause. It would be a real possibility to tumble over the side of the mountain in some of the more narrow places as you traverse this road, and, as a matter of fact, on our recent trip, we did find a truck body at the bottom of the mountain. Not sure how it got there, but opinions vary. I traveled to Thayer from Thurmond on my first attempt at Dowdy in 2014. We went on beyond the Slater Creek intersection but quickly turned around. Several years later, I attempted an entry from the Prince/Quinnimont end. We managed to and beyond the substation about a mile in, but turned around shortly after. Basically, I gave up at this point, but continued to research and ask around about approaching this waterfall. Not many get to it so the info is sparse.

Recently, after speaking with an online friend and also having stumbled across the “Trackside Photographer” website, which was the best thing I’d run across in a long time, I decided to walk in and then I learned about the tunnel. The Stretchers Neck Tunnel is in the west bound direction from the Prince AmTrak Station in Quinnimont. We parked at the station and walked the tracks into the tunnel. There is a service road alongside the tracks that extend through the tunnel and on down the river alongside the tracks. It’s a 2.6 mile walk to Dowdy Creek and the tunnel is curved and dark as black is dark. Bring a flashlight.

So, going through the tunnel is dangerous as hell, so best practice would be to wait for a train to go by and then hustle on through to the other side of the tunnel. It’s about 1/4 mile. You probably don’t want to be in the tunnel when a train comes through, even though there is plenty of room on the service road. But it’s very dark and filled with chuck holes and gravel/rocks on the road surface. A train going through while you are in the tunnel will most probably scare the crap out of you if you have never been in that situation before. May cause you to act irrationally, so be careful. It’s also illegal, but my sources tell me that it’s CSX and that they are more lenient than NS when it comes to trespassing on the right of way.

During our hike we witnessed 4 different trains go by and three maintenance or inspection type vehicles. Noone seemed to take much notice of us and infact some waved and were seemingly pleasant. Don’t let that deceive you. This way is illegal and I can’t assure you of safety in any respect.

The creek is obvious and hard to miss but getting to the upper falls (I was unable) is very dangerous and difficult. I was happy to come away with a shot of the lower falls, though it was disappointing not to be able to visit the upper falls. Getting to the upper falls requires a climb up a very steep and muddy hillside with not many handholds and then a horizontal traverse across a steep and slippery narrow horizontal space on the edge of a sheer drop. This is the only way I know to get to the upper falls from the lower on the left side, but when you get there, you can try and find your own way. The only other way is up the hill on the right and that is really steep and dubious. Doesn’t look doable for the average hiker.

Anyway, my friends Jim and Kirt made it, but I came back down before the horizontal traverse and hung out with Kirts wife while the boys did their thing.

Being an old fart and not in the best of shape, I came home that night with quite a few sore muscles and joints. That necessitated a cancellation of the Sunday hike as it was even more stressful, so Jim and I decided to traverse the newly graded Deepwater/CottonHill Rd. (CR13) from Beckwith Road on down to the New River at Kanawha Falls, across the river from Glen Ferris. If you look on the map and see a bridge there; it’s closed. That is why I was excited to hear that the road had been regraded and that culverts had been installed. In my previous adventure up this road from down below, before they closed the bridge, it was difficult at best in certain areas. Now with the new culverts installed and the road being graded all the way from Beckwith, it’s quite an easy drive. City car friendly.

The road follows Falls Creek during the later part of the journey, and when you near the river, you may be able to see the falls of Falls Creek roadside on your right. It’s about a 100′ drop from the road and there are a few views from above, but your best view is from the base. To achieve this perspective you need to go on down the hill to the bottom at the bridge and turn right on Kanawha Falls Rd. (CR13-2) and drive out to the culvert under the tracks on your right. Walk up the creek to the falls. It’s not that bad in low water and in high water you can turn left out of the culvert tunnel and hike up the creek on the left. Once you get to the top, it will be up to you to find your way to a good photo spot. There are several very large rocks and fallen trees to overcome to move upstream nearer the base of the falls, but there is a good flat spot in front of the falls. Not sure how accessible all this is in high water.