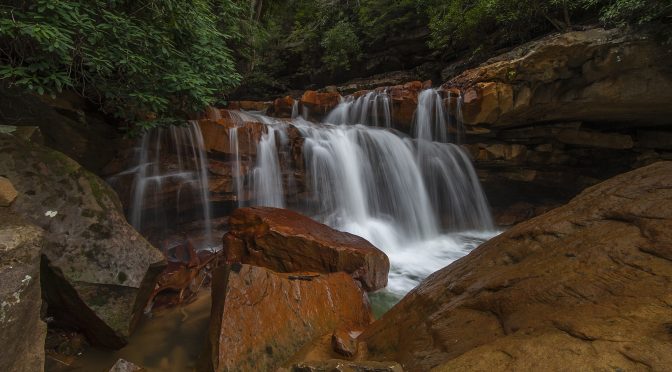 In the furtherance of my project to publish the second edition of my book, West Virginia Waterfalls, I planned a trip to visit the remainder of the unseen falls on my list in the northeast corner of the state, several of which were mandatory. I spent a lot of time visiting and talking to people around Terra Alta about the falls on Saltlick Creek. Having seen images of these falls over the years and making no less than four other attempts to find a proper route to the falls, I decided to make the walk. The housekeeper at my hotel in Kingwood had passed on some clues about access, so on Sunday we decided to stop in. Things worked out well and after a short 1/2 mile walk we arrived at our goal. Shooting at this location was a trial with lots of fallen timber and other vegetation, but I think I was able to obtain some satisfactory results.

Prior to and on the way to Saltlick Creek, we stopped by a couple of places that I had heard about south of here. We found the first right off on Scott Run. It was posted but viewable from roadside, thus the lousy photo, but while there we ran across a nice lady walking her dog who, oddly enough, was the sister of someone who lived right by the next waterfall on our list and gave us good info about visiting the site. It’s always good to talk to the locals.

Other falls we visited were Pell Falls and Fortney’s Mill. Pell was pretty nice but Fortney’s was somewhat of a disappointment after pictures I had seen, though it looked like a nice swimming hole.

Other places we visited along the way were previously visited locations. Deckers Creek was visited several years ago in the spring after some serious rain and the falls on the creek were almost indistinguishable because of the high water level. This time I think we got some nice images that actually depict the real look of the falls.

The crowning glory of the trip was the adventure to try and get to Matador. The waterfall on Bull Run in Preston County was on the list for years. I always knew this was a difficult fall to see but hadn’t tried before. The original idea was to approach from the east after visiting Saltlick Creek Falls, but after (fortunately) conversing with some ATV riders in a gas station along the way, we decided to go in from the west, thus the stop by Deckers. They told us that the road was not suitable for my truck and I took their word. They also said that they didn’t know if the bridge across the river would be open or not, but that the road was atrocious, so we decided on Plan B.

Matador is on Bull Run and it’s about 500 feet below the road surface in the creek. The walk down is not treacherous, but it is difficult and the last several hundred feet can hurt you. This is also a difficult place to shoot (for me anyway), as there are huge boulders in front of the waterfall. I didn’t like that, but was not in a mind to wade into chest deep water to obtain a pristine shot. Anyway, just being there was worth the trip and I got a couple shots for the book so I was good with it, and I got some exercise.

All in all an eventful and fruitful three days in the Morgantown, Kingwood area. I was happy to see some old friends and make some new ones and to knock a significant chunk off of the list of locations to complete my work.